Apparently, August is the wedding season. A lot of my Malay colleagues are getting married. I think they're all trying to get hitched before the fasting month starts in September. I was talking with the makeup artist who did our makeup for the photo shoot, she said quite a lot of people asked if she could do their makeup.

Getting married makes me feel slightly older, am I supposed to be more mature? I don't feel anymore different. Maybe it was so gradual I don't feel it. I wonder if I'm still the same person... compared to say, 10 years ago. I guess the only way to find out is to find someone who hasn't seen me for 10 years.

Now, two of the host I worked with, Naz and Daphne are already married. Daphne with a baby girl and Naz just got married last month. Now all 3 of us are married (me, I just registered my marriage, legally I'm married!). I haven't gone through the banquet and traditional ceremonies yet. 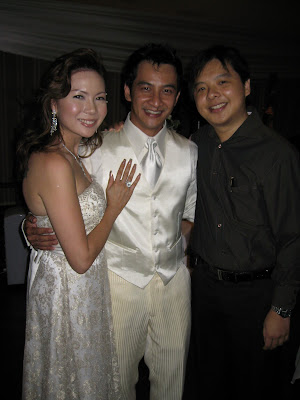 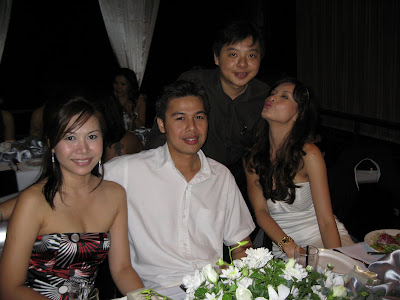 Looking back, Ringgit Sense was the first program I ever produced. The company had a VSS and all the team members including the producer took up the offer and left. The program was half way through mid-season. I had to finish of the program single-handedly. The next big challenge was to revamp it and find two new host.

Daphne was already a reporter and manager say use her as the female host. We were still short of a male host, my CEO suggested using Naz who was still hosting the Disney kids show. I was sceptical at first. I had an untested female host, a kids show host who had to do a semi financial program. It was a huge hurdle to over come. It was either sink or swim.

Till this day, my production style has largely been influenced a lot by what I learned from that first season. I had to shoot a lot of things on my own. I learned how to do 3 person's job by myself. It was crazy but I found that I'm a control freak. It was just so much easier than telling someone to do it when you can do it yourself.

Now, both Naz and Daphne are successful hosts. My production assistant is now producing his own documentary. One of my reporters is now a corporate communications manager. In this line of work, not many people stay on in it. Those who stay on after 5 years really like it or are complacent.

Me? I'm doing okay. I've done almost every genre there is to do in my department, "Magazine, Family and Documentary". I did a magazine program, a reality show, a daily live talk show and now, shooting a documentary.

I think what my TV Productions Major and Film Studies Minor really helped in the early parts of my career. I still remember the first time my Television Productions Professor showed me a computer that was used for editing. He said, this machine would change everything, those who learn it would go far in their career. Most of the students in my class didn't think much of it.

Back then everyone was still editing deck to deck. I didn't think much of it either, I meant... editing on a computer? That was just way too advanced. One of the test we had was actually to type a title on the computer. I still remember instinctively cutting and pasting things and my professor was amazed I could cut and paste a title. He didn't even knew it could be done... frankly, neither did I.

Now here I am, teaching people to use the AVID machines we have. I find it amusing when people ask me, when did I learn to use Non-Linear Editing machines like AVID. I think back to 1998 and the first time I saw what must have been one of the earliest version of it in my university. Now that I think about it, I think that machine could only create titles instead of editing. It was a character generator. Man, that was a really old machine.

We have a whole bunch of interns who come in every year. This batch of new interns are starting to make me feel old. They look so young. Maybe just because I keep getting older every year and they just stay the same age every year.
Posted by luxen at 1:47 AM 1 comment:

I got a wierd phone call a few hours ago in the middle of the night. I decided to sleep early tonight. I was already dozing of while watching the midnight news on TV3. I turned of the TV before the news finished and when to bed. Just as I was falling asleep, my phone rang. In my blurry haze I picked it up without even checking who it was.

I turned out to be someone I haven't spoken too in a year. The guy's a VIP now compared to the last time I spoke to him. He called to check... wait now that I think about it, I think he was calling to complain about a news report which involved him. I didn't really know the full story, I had read parts of it in the newspaper so I just agreed to what he had to say. As far as my dealings with him, he was a nice man and I didn't doubt his credibility.

He wanted to clear his name and he wanted to talk to who was in charge of the newsroom. I haven't talked to anyone in the news department in a long time. I told him I'll check tomorrow... I have to find out who's in charge from someone else first of all.

That is if I remember this all tomorrow morning. yawn... time for bed.

I hate it when I get strange phone calls in the middle of the night.
Posted by luxen at 3:51 AM No comments:

Woke up late today, drove to her house with my brother, mother and kids in tow. We took two cars to the Putrajaya National Registration Department. It was quite a fast process. There was a lot of couples there but we only waited 30 minutes I think. The lady who swore us in must have spoken the line so often it was automated. It was kind of like marriage fast food.

My colleague who was my photographer didn't make it in time so I called him to tell he didn't have to come since it was already over. My brother ended up taking photos for us. Her sister was her witness, my brother was my witness.

We quickly hurried ourself out of the room as other couples were also waiting to get hitched. The Putrajaya marriage registration department is really nice compared to some of the ones I have seen around the Klang Valley. The decorated the place with spots for you to even take photos.

No photos to show here but you can surf the net to see what it looks like.

luxen
petaling jaya, selangor, Malaysia
I am currently a TV factual content producer. I love television production and over the years I have produced documentaries; magazine programs and talk shows. I love sharing and learning about storytelling for factual content.

Visitors from around the world