Today me and my wife had dinner at Murni Discovery. It's the new branch of Murni mamak from SS2. If you ever seen Murni in SS2, Petaling Jaya, it's an extremely popular and crowded restaurant.

I hardly ever eat there because you can never find a table and there's hardly any parking as they place all their tables on the parking lots already.

So when I saw that they were opening in Sunway Mas, I was quite interested to try their food. You can find them here in the wikipedia map that I have already marked out here. The cross marks the spot. 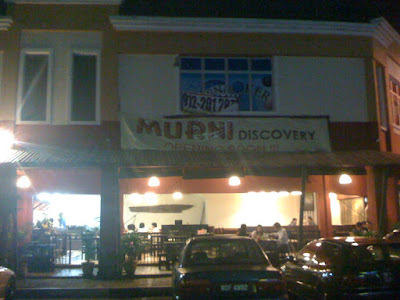 My first impression is that parking is a lot easier now. Its the only mamak in that block so at night parking should be plenty. Also, they have a corner lot and more tables. Hopefully, they won't have to resort to putting tables outside their shop here. It was only their 4th day of opening so word still hasn't gotten out about the place yet. 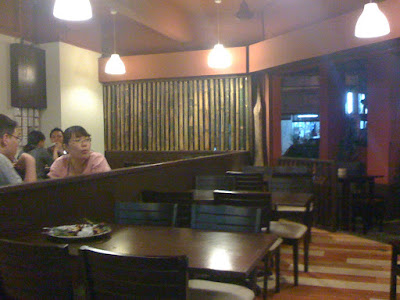 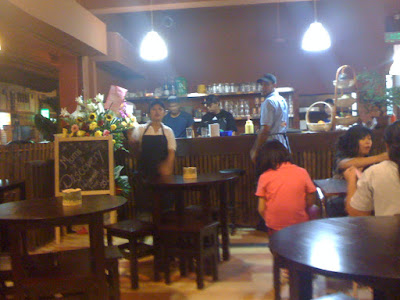 Check out the interior design of the shop. Before Murni took over this place, it was a cafe that hardly had any customers. Murni didn't change much to the decor except to add some bamboo decor. My wife said she saw the owner come in a lorry with bamboo and he must have cut it himself as he was wearing an army ranger outfit. Cool, I always like DIY!

If you haven't tried Murni before, they're famous for their fusion mamak and western food. I ordered their fried rice with soft shell crab because it was the most unique thing on their menu. 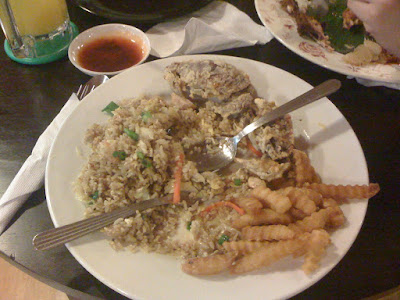 The soft shell crab needed a bit more seasoning. It was just the crab dipped in flour and fried. Not much taste to it. However, the fried rice was excellent. Not sure why there were french fries in the combo, didn't go well. Next time, I'm just having the fried rice.

Their chops and sirloin steak is also very popular.

I looked around at what else people were ordering and I saw the portions that were serving were huge! Rhey're like for 2 people for each single person dish.

Also, the price is really cheap for their mix rice. My wife took away 3 dishes for my mother-in-law. There was some prawns and rice and it only came up to 2 ringgit! That's like the cheapest mix rice I've ever seen! Not sure if its just a promo price but the guy told my wife its their normal price.

Well, now I know where to go when I'm hungry!
Posted by luxen at 11:59 PM 4 comments: Links to this post

Lately, there has been a lot of talk on what I would call themes and ideas in the media that, I feel needs better explanation. Let's start with the first one, "1 Malaysia".

1. When Najib started this idea of 1Malaysia, my first thought was One Utama, the shopping mall in Bandar Utama, Petaling Jaya. When Najib first started talking about unity and how its about bringing Malaysians together, he never clearly explained how he would go about it through implementation of policies.

Instead, what happened was, the media started interviewing smaller politicians on what they thought it meant and they got a variety of answers. To make matters worst, companies started to cash in on this 1Malaysia idea with such slogans as "product X for 1Malaysia" or "product X in support of 1Malaysia". How do you support 1Malaysia when you don't even know what the heck it is? Is 1Malaysia assimilation? is it multiculturalism?

I think Najib is just keeping it vague so that he can use it as a political tool. Let's say for example, someone on the opposition proposes an assimilation policy, for example... "all Malaysians should go to single stream schools!". If it gets a lot of opposition from the public, Najib can always say "no, we can't do that, its not in-line with 1 Malaysia".

Now let's say if another politician says, "government should review the NEP and make it more friendly to the non-malays". If there is support for it, he can always say "we will study it in the spirit of 1 Malaysia".

Everyone in their head would have their own vague interpretation of 1 Malaysia and think, "oh okay, I guess I'm going to get what I want! Since I don't even know what 1 Malaysia, so Najib's probably thinking what I'm thinking".

The government has a publicity campaign potraying it as a feel good campaign with multicultural kids playing together (how come its always malay, chinese and indian? where are the other races?). Maybe peninsula Malaysia has more of a cultural unity problem then Sabah and Sarawak?

2. The Greater Unity Plan
This Ong Tee Keat is quite a crafty fellow, he only tells the inner MCA circle what it is and he has said it's not a mathematical model. Doesn't really explain how its going to make MCA better. Maybe he learned a thing or two from Najib.

3. New Economic Model
One economist I talked too told me since this new economic model that Najib has been talking about is based on a service based economy, it sounds a lot like an old idea that was already proposed along time ago, the Knowledge Based Economy. It was proposed more than 10 years ago and it started things such as the Multimedia Supercorridor project.

Not much information is forth coming from the policy makers yet on what is this new economic model. Probably the likes of NEAC are still tinkering with the idea and trying to figure it out.

How do we get 6% GDP growth every year when we're stuck in a middle-income trap? A lot of people like to compare the Malaysian economy to the South Koreans. We started of after world war 2 at the same time but South Korea has soared way above us and literally over-taken the Malaysian economy. They've gone on to be a high-income economy, but here we are still stuck at a middle-income economy.


I bet there's a lot more ill-defined slogans out there, care too name any?
Posted by luxen at 10:57 AM No comments: Links to this post

What I've been up too lately

The other blog is work related, it's for the program I've been producing. I'm not going to write it down here as I don't want google searches for that blog to push people to my personal blog. I'll like to keep it separate.

Anyway, the other things that I've been busy with is work! Yes, work! This show I've been doing is aired every Sunday night and it's live. So now I work Wed to Sunday. I get Monday and Tuesday off... and most of the time, Saturday too if there is nothing to do in the office.

I kinda of like working on Sunday nights now. I find it quite peaceful in the office. When everyone's winding down to prepare for Monday, I'm all psyched up getting ready for the live show. By midnight, I'm extremely relieved that the show is over and I have my 'weekend' to look forward too. On the other hand, my wife is complaining that she has to go back to work on Monday morning.

So what have I been doing on my Mondays and Tuesdays? Well, the original plan was to take short drives to remote places for day trips. In reality, I've just been sitting at home doing nothing. I wake up at 1PM on Monday because I sleep at 3AM on Sunday night.

On Tuesday, I wake up at 1PM again and by then... it's too late to drive anywhere. So the furthest I go is around Petaling Jaya. So much for being adventuress.

At home, I've been downloading stuff of file sharing sites. So that's turned into sort of a hobby of mine now, looking for the latest versions of software's to download and music files.

Recently, I spend a few days trying to get the latest version of a software I was using that hardly anyone outside of my industry would use. After I got it, I installed it and it was so new, it had problems with the old version my office used. In the end, I had to uninstall it. What a waste, it was too advanced for its time.

Anyway, I got to go now. I'm in the office and I have to get back to editing!
Posted by luxen at 3:41 PM No comments: Links to this post

luxen
petaling jaya, selangor, Malaysia
I am currently a TV factual content producer. I love television production and over the years I have produced documentaries; magazine programs and talk shows. I love sharing and learning about storytelling for factual content.

Visitors from around the world